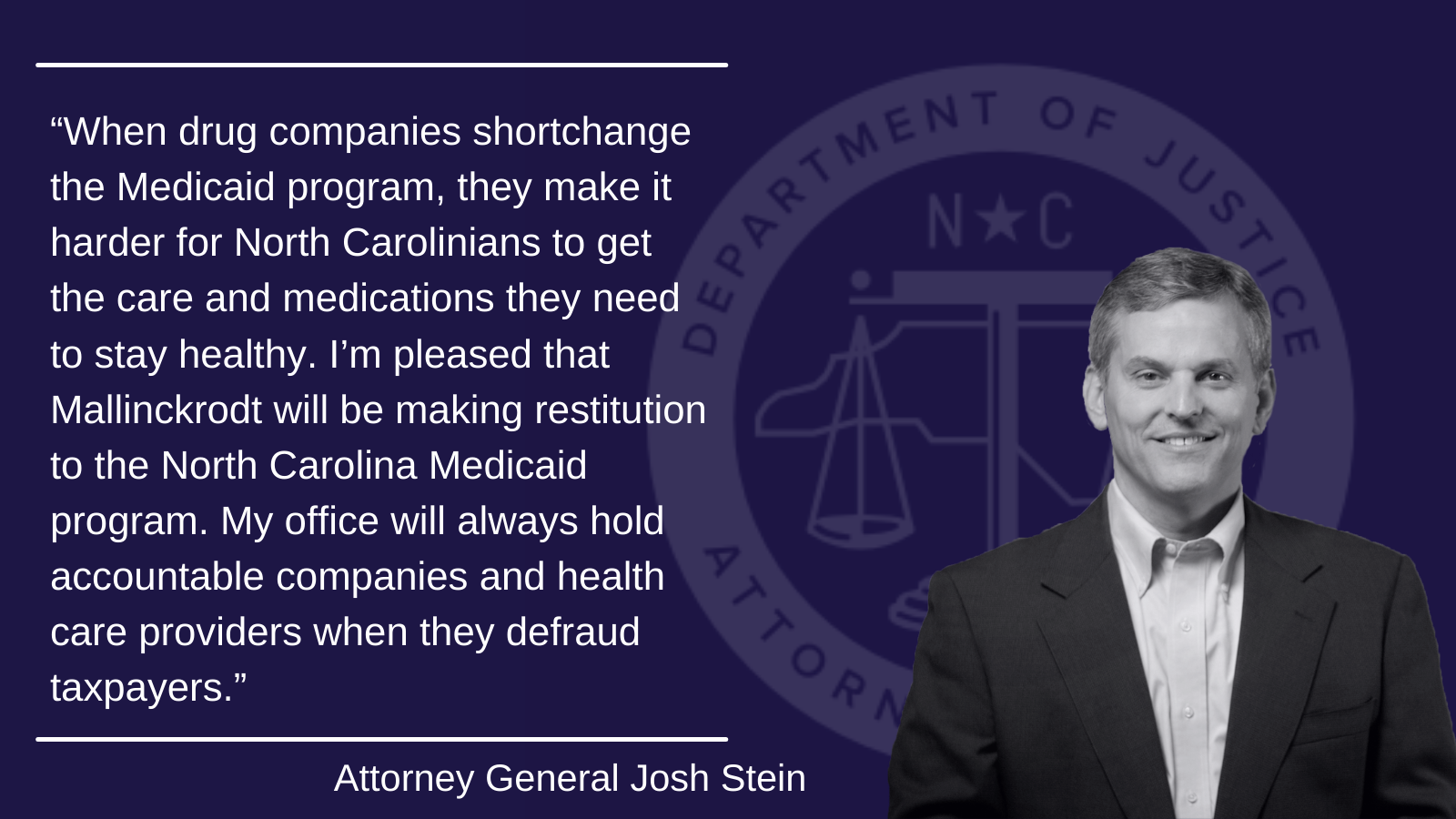 “When drug companies shortchange the Medicaid program, they make it harder for North Carolinians to get the care and medications they need to stay healthy,” said Attorney General Josh Stein. “I’m pleased that Mallinckrodt will be making restitution to the North Carolina Medicaid program. My office will always hold accountable companies and health care providers when they defraud taxpayers.”

Under the Medicaid Drug Rebate Program, when a manufacturer increases the price of a drug faster than the rate of inflation, it must pay the Medicaid program a per-unit rebate of the difference between the drug’s current price and the drug’s price if it had gone up at the general rate of inflation since 1990 or the year the drug first came to market, whichever is later.

However, Attorney General Stein, along with 49 other states, Washington D.C., Puerto Rico and the federal government, alleged that Mallinckrodt and its predecessor Questcor began paying rebates for Acthar in 2013 as if Acthar was a “new drug” just approved by the U.S. Food and Drug Administration (FDA), rather than a drug that was first introduced to market in 1952. Allegedly, this practice meant the companies ignored all pre-2013 price increases when calculating and paying Medicaid rebates for Acthar from 2013 until 2020. In particular, the government alleges that Acthar’s price had already risen to more than $28,000 per vial by 2013, so ignoring all pre-2013 price increases significantly lowered Medicaid rebate payments for Acthar. The governments alleged that Mallinckrodt’s conduct violated the Federal False Claims Act and the North Carolina False Claims Act and resulted in the submission of false claims to the North Carolina Medicaid program. Under the settlement agreement, Mallinckrodt admitted that Acthar was not a new drug as of 2013 but was actually approved by the FDA and marketed prior to 1990. Mallinckrodt agreed to correct Acthar’s base date AMP and that it will not change the date in the future.

This settlement results from a whistleblower lawsuit originally filed in the United States District Court for the District of Massachusetts. The federal government, twenty-six states including North Carolina, the District of Columbia, and Puerto Rico intervened in the civil action in 2020. The settlement, which is based on Mallinckrodt’s financial condition, required final approval of the U.S. Bankruptcy Court for the District of Delaware. A team from the National Association of Medicaid Fraud Control Units participated in the litigation and conducted settlement negotiations on behalf of the states.

Attorney General Stein previously announced a separate settlement with Mallinckrodt in October 2020 to address the company’s misconduct in manufacturing opioids. That settlement also received final approval from the U.S. Bankruptcy Court for the District of Delaware.

About the Medicaid Investigations Division (MID)

The Attorney General’s MID investigates fraud and abuse by health care companies and providers, as well as patient abuse and neglect in facilities that are funded by Medicaid. Medicaid is a joint federal-state program that helps provide medical care for people with limited income. To date, the MID has recovered more than $900 million in restitution and penalties for North Carolina.

The Medicaid Investigations Division receives 75 percent of its funding from the U.S. Department of Health and Human Services under a grant award totaling $6,160,236 for Federal fiscal year (FY) 2022. The remaining 25 percent, totaling $2,053,412 for FY 2022, is funded by the State of North Carolina.